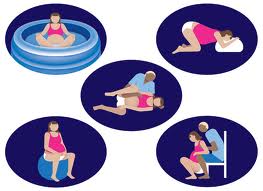 Encouraging women to freely move and change positions often during labor is a sorely overlooked tool to having a successful childbirth experience.

So many women have no idea that during labor they can take off the fetal monitor, get up out of their hospital beds, and move their bodies into upright, leaning, squatting, kneeling, walking, and other positions for comfort. They can even push their babies out in these positions.

When women move during labor:

Movement is essential to giving birth and historically the majority of women have never laid down upon their backs to give birth.  The more common and effective birth position have been squatting, hands and knees, leaning, and kneeling positions.

Laying flat on the back to deliver a baby came into being only when men started to become  the primary care givers assisting women during birth. However, for thousands and thousands of years giving birth world wide was handled by women and midwives, and giving birth in a bed was uncommon.

Download handouts on birth positions from Mother’s Advocate, see Walk, Move Around, and Change Positions Throughout Labor and Maintaining Freedom of Movement.