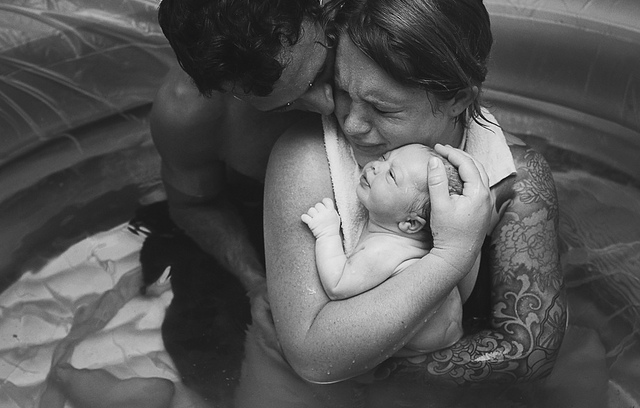 Maternity care has a history of using medical procedures that have not been researched, clinically tried or proven to be best for women and their babies.

And even when research shows that interventions such as episiotomy, fetal monitoring, use of pitocin, restricting food, restricting movement and so forth could cause harm — changing medical practice and improving outcomes for women and their babies is slow going. (See healthy birth practices)

Waterbirth should be least concerning as the practice is centuries old while today’s medical management of birth does not have the same historical record to prove it’s effectiveness.

What is known shows medical interventions being used upon women in labor at increasing rates with benefits for few while the vast majority of women that could successfully labor with little or no intervention are deterred. Birth is viewed and managed as life threatening for most women, when quite the opposite is true. For healthy women birth is a normal function of their life cycle. Birth has worked since the beginning of time.

The argument that women die in childbirth is a poor one. Women have in the past and still do die in childbirth. However, using interventions such as cesareans have not lowered the maternal morbidity and infant mortality rates. Women and babies are still dying every day during childbirth. Restricting waterbirth will not statistically lower those rates.

Read the reference from the CDC which shows that the United States maternal morbidity rate is severe and has been steadily increasing each year.

Of all the births occurring in the United States most are not waterbirths. In fact waterbirth is not available at most hospitals and even where it is available the majority of women in labor will not have a waterbirth.

Given the reality today that most women are not using waterbirth why did the ACOG decide to make a recommendation stating that the benefits of waterbirth have not been shown and that rare but serious health problems in the newborn have been reported. This statement has led some hospitals that offered access to tubs during labor to take away that option, and others that were offering waterbirth have stopped.

American women have freedom of choice, but do not have the freedom to choose how to give birth. Dee Abe

Waterbirth is not expensive to implement or oversee. The United States homebirth rate is increasing some what, and women that have a homebirth are more likely to utilize waterbirth. Could it be the recommendation against waterbirth is to limit the increase of midwifery care, homebirth, and inexpensive methods of maternity care?

This question may seem far reaching, however the history of maternity care in the United States shows laws and regulations being written to reduce the number of midwives competing with physicians.

Maternity care is a top revenue stream for US hospitals and the more interventions used the more revenue. Midwives are known to provide cost saving effective care. It is important to ponder if fear of decreased revenues for hospitals and physicians plays a role in the ACOG opposition statement regarding waterbirth.

Consider the revenue split if the current 32% of women having cesarean births in the United States reversed and these women begin having either waterbirth, homebirth, or births attended by midwives.